Be Bold, Not Safe

There’s a quote I saw the other day from George Lois. He’s the guy Don Draper from Mad Men is loosely based on. In the quote, he says, “In the act of creativity, being careful guarantees sameness and mediocrity, which means your work will be invisible.” He goes on to say that it’s better to be reckless than careful; to have your work seen and remembered, otherwise, you’ve struck out.

He said this a long time ago, but I believe it something that should but doesn’t always resonate in marketing today. When they teach advertising, marketing or communications in schools, they always focus on one thing: clutter.

The marketing industry is so laden with clutter that it’s almost impossible to sincerely and effectively reach your audience. Think about it: the billboards we pass while driving, the display ads we don’t notice, radios, television – it’s everywhere and we’re consuming it constantly. As consumers, we have trained ourselves almost to ignore this consumption, which is the reason clutter is so detrimental.

For a brand or business to reach us, they have to do something that stands out – something that is strange and weird. Not only will this help notice it more, but it will also get people talking. Something that made me think of this is McDonalds latest campaign involving their introduction of different sized Big Macs. Here’s the video if you haven’t seen it:

Yes, it’s real. If you can’t watch the video: McDonald’s is starting a social campaign where the prize is a “Bling Mac” ring valued somewhere around $12,000. It’s insane. It’s weird. The strategy behind it is foggy. However, it’s getting coverage. People are talking and writing about it, as well as people getting involved and engaged in the campaign. It’s working. Now, not all of us have the budget of McDonald’s to run campaigns based around – essentially – giving away jewelry. The budget is not what’s important in this though; it’s the mindset.

Being bold in marketing doesn’t always have to be expensive. However, it almost always involves taking the risk of some kind. For McDonald’s, they’re risking alienating older audience who may not understand the humor behind this campaign. McDonald’s can take that chance. For some local agencies though, stepping out of our comfort zone to do something people aren’t used to much scarier.

As the owner of a marketing agency, I understand this more than most. My team struggles with it almost every day, asking ourselves how we can break through everything else and reach our audience. And, when we get to them, how do we genuinely connect with them? I don’t know the answer yet, and I don’t think McDonald’s does either. But our industry and businesses, in general, will never find that answer unless they’re willing to pivot, being bold and not safe. It reminds me of another quote from Geroge Lois:

“In any industry, the fact that others are moving in a certain direction is always proof positive that a new direction is the only direction.”. 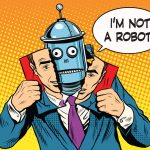 Marketing & The Absence of HumansMarketing, Opinion